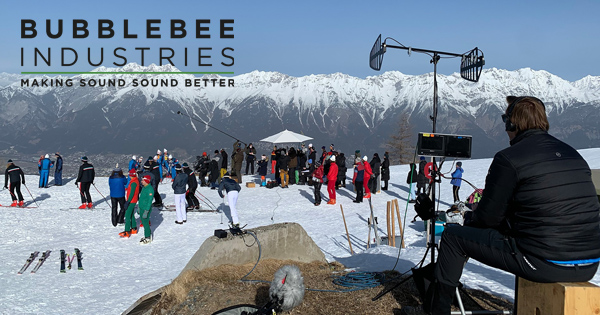 With over 60% of the country in the Alps, it’s likely that anyone choosing to shoot a film or TV programme in Austria may find themselves in a mountainous location. This could present difficulties for an inexperienced crew, but fortunately Austria has an established film industry with crew that are used to dealing with extreme conditions. Production sound mixer Herbert Verdino is one of them. A ski instructor in his younger days, he has occasionally been called on to deploy his mountaineering skills while filming various documentaries.

For his most recent projects – filming the Austrian-German TV crime drama Der Pass and two feature films in the Alps – he often had to contend with the remoteness of some of the locations and the impact cold and wind could potentially have on the audio he was capturing and his sound equipment.

“Recording audio at altitude requires a lot of forward planning,” Herbert says. “Every film crew member I know in Austria, including myself, is used to packing gear as lightly as possible so they can shoot in the mountains. You get used to shooting in locations that are not easily accessible by car, so you must think ahead. How much gear will I need? And when there is nowhere to charge them, how many batteries?

“Also, especially in winter when it can be very cold and windy, what accessories do I need to capture great audio and keep my equipment protected? What you wear has to be carefully considered as it can get really harsh in the Alps. It does become complicated, and you do need to choose carefully when you don’t have the option of throwing everything into the back of a truck.”

Some of Herbert’s favourite sound tools and accessories are from Bubblebee Industries. “Bubblebee products are incredibly well made, and I have been using them for several years now,” he says. “Reliability is so important when you are on location and, because they have such a full spectrum of products, the chances of finding a product to solve a problem increases a lot.”

Herbert adds that for the second series of Der Pass (aka Pagan Peak), which is currently screening on Sky, he made good use of Bubblebee’s virtually invisible Sidekick IFB In-Ear monitors. These communications earpieces feature a unique micro driver that fits comfortably and invisibly into the ear canal, removing the need for an acoustic tube outside the ear and providing a good alternative to earwigs. Because they are so small and lightweight, they can also be worn comfortably for hours on end. “Sidekick IFB monitors are absolutely great and have become one of the mainstays of my sound kit,” Herbert says. “They are very discreet and the Sidekick 3 can be easily switched from left to right ear to accommodate different camera positions. During shooting for Der Pass my boom OP and script loved the Sidekick because its sound quality was so good for such a light and tiny earpiece.”

Co-created by Cyrill Boss and Philipp Stennert, who also wrote and directed the show, Der Pass is inspired by the Danish/Swedish series The Bridge and follows a very similar trope. Largely set in the Austrian-Germany border area from Traunstein to Salzburg, it begins with a body that is discovered lying precisely on the border between Austria and Germany, which results in a collaboration between German detective Ellie, played by Julia Jentsch, and Austrian detective Gedeon, played by Nicholas Ofczarek. The second series is also set in the mountainous border region.

“With some of the characters there was a requirement to sing because they listen to music in their cars and they sing along,” Herbert says. “There was one particular occasion where we were capturing a scene in a Land Rover Defender and everyone was piled into it – the actor in the front and the director, camera crew and me in the back. Dominic Marcus Singer, who plays the bad guy in the show, was supposed to be singing along to a song on the radio, so I put the song on my iPhone and connected that to the transmitter so I could give him playback through the Sidekick. Using this method, I was able to record his voice cleanly during the takes and it allowed the song to be added in post. This worked really well.” The first series of Der Pass, which was also recorded by Herbert Verdino, won the award for Best Sound at the 2019 German TV Academy DAFF (Deutsche Akademie für das Fernsehen). Shooting for the second series took longer than anticipated because of the COVID pandemic but was eventually completed at the end of 2020. After that, Hebert was back in the mountains capturing audio for Klammer, Chasing The Line, a feature film that tells the story of Austrian ski racer Franz Klammer and his victory at the Winter Olympics in 1976. Half of the film was shot in a studio in Vienna, but the rest was filmed on the original 1976 ski slope in Tyrol, Austria.

“This was another situation where I needed to choose my equipment very carefully,” Herbert says. “For the mountain scenes we were shooting on ski tracks and slopes in a resort where there were also cable cars and snow mobiles, so logistically it had to be very well organised. However, I still had to fit everything into a backpack. My equipment had to be light enough to easily carry up the mountain but sufficient to record up to seven actors. I took lavalier microphones and two booms, plus a Sonosax SX-R4+ and Wisycom wireless systems, all of which fitted into two bags.”

Herbert began his career in audio as a boom operator, but notes that lavalier microphones have become more important on film sets in recent years.

“I mainly use DPA lavalier microphones and Bubblebee accessories because they have a lot of very useful tools that suit many different situations. Having them in your toolbox gives you a lot more options. After establishing mic positions for different costumes, you can equip your mic with these tools before placing them on the actor. Or you can just give the prepared mic to wardrobe or say to your assistant ‘last time I used a DPA 6060 mic with a Bubblebee concealer and fur on this costume and it worked well in this position’. These tools make communication easier, but as with every tool you need to know how to use them – and sometimes it’s better to use no tools at all.”

Alongside his filming work, Herbert also runs Filmzeug.at – an audio and video equipment rental business and online retail shop, both of which stock Bubblebee products.

“When we started Filmzeug the rental business, I wanted our range to include a few small products that we could sell,” he explains. “Bubblebee accessories fitted the brief perfectly because they are useful and reliable tools. Our customers like them, and they sell well.”

Herbert adds that the advent of digital technology has also made a difference to how films are made.

“I know sound mixers who used to capture an entire film with a mono Nagra tape machine and two boom mics. Now, we regular use up to 16 RF channels and more. We also shoot faster and capture more content because we are recording onto digital cards, which are cheaper than film or tape. Using two cameras has become the norm on a lot of projects.

“Although digital technology has helped create smaller and lighter equipment, this hasn’t reduced the amount of gear that is used in modern production techniques. Film crews can often carry a lot more – for sound, for example, more RF receivers, power banks and accessories. “It comes back to making careful choices at the start of the project, especially if you are on location, so that you only take what you really need and are well prepared for technical (and human) failures. Tools and accessories are important for solving particular problems, but you also have to know how to use them – and that’s where experience comes in. People think that if they buy certain tools their sound quality will improve because of that purchase, but the sound captured will only ever be as good as the skill of the sound recordist. You do need experience in this industry because you are only ever as good as your last job. You don’t hire a carpenter just because he knows how to use a drill or a hammer – you also want his skill and creativity. The same goes for the movie industry.”

Since completing the second series of Der Pass and Klammer, Chasing the Line, Herbert Verdino has worked on two more feature films, one shot in Germany and the other in Austria and Croatia.

“When I’m not filming, I focus on the rental and online businesses, which means there is always something to keep me occupied,” he says.